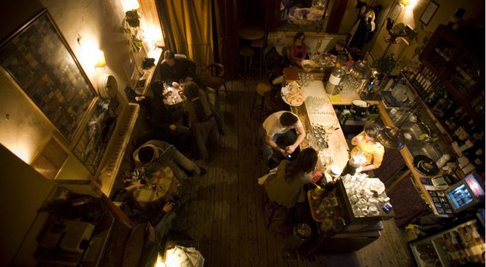 In recent years the Szimpla family has become some of the most popular bar promoters in the Hungarian capital monopolizing on the “romkocsma” trend of bars built in abandoned buildings and derelict public spaces. With two locations in Budapest as well as a sexy summertime camp on the outskirts of the city, Szimpla Kert is the most popular with the city’s trend crowd in an abandoned warehouse building that from the outside looks almost too dangerous to enter with its graffiti-clad iron doors. <br /><br />Inside, a large outdoor courtyard is contained within the center of the former ruin arranged in communal tables conducive to the daytime coffee and lunch crowd as well as the pub folk that follow after 10pm. The bohemian style of the interconnecting lounges feels of another time, messing antique outdoor tables with found objects and ‘50s chairs. Surrounding the courtyard are a series of further lounges that contain kicker games, hookah shop and various rumpus rooms as well as a larger indoor bar used during winter months.&nbsp;