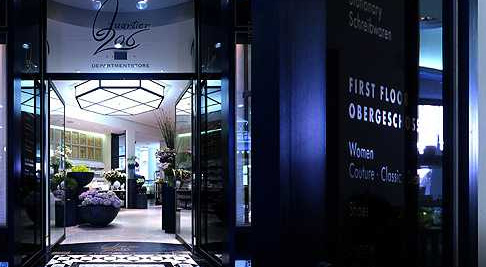 Friedrichstrasse has always been one of the premiere shopping streets in Berlin, even during the DDR-days when it was a member's only club for proletariat elite. The street has since been revitalized and is now open to all, providing you don't mind paying top-Euro for imported Italian and French designers set up in individual boutiques that make up the department store. The structure, a play on black-white marble intersected by skylights, was designed by I.M. Pei Partners (think: Louvre Pyramid) and is conveniently built next to Galeries Lafayettes, the upscale French department store.

Be sure to stop into the designer outlet in the basement, called %, where seasonal merchandise is sold at great discounts.

Professional shoppers and fashion groupies wander between boutiques by fashion Etro, YSL, Gucci and Valentino. Not limited to just fashion, the store features several home designers, flowers, arts, books and a full-service restaurant. Many foreign visitors are surprised at how few shoppers are found in many of BerlinŌĆÖs upscale boutiques. A layover of reunification, the city still faces unusually high unemployment and displacement from the Euro-conversion in 1999.