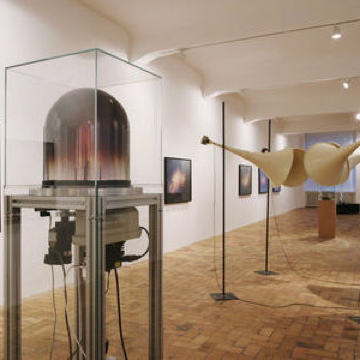 In and around Check Point Charlie, German-transplant galleries like Buchmann Gallerie and Julius Werner Berlin have emerged as leaders in attracting cutting-edge emerging artists as well as more seasoned second-generation works. Kreuzberg, formerly Berlin’s roughest neighborhood, still manages to retain that edgy boho-vibe despite openings by Jablonka Gallerie and an outpost of Düsseldorf's Konrad Fisher Gallerie.  But the splashiest gallery opening to date has been in the Mitte, fully-gentrified since reunification, where Haunch of Venison debuted its third major gallery following its successful forays in Zürich and London.

For around $900-a-month exists a diverse rental market of period buildings and actual lofts yet to me injected with preppy 30-something Starbucks-pushing urbanites.And with the artists, a new generation of galleries and dealers are setting up shop in the German capital.

Goodbye New York and see-you-late London, an emerging generation of struggling artists is leaving the pricey metropolises of yesterday in lieu of the more affordable cities of tomorrow. One of the most affordable cities in Europe, Berlin is the latest “it” city for emerging artists attracted by its drab Eastern European vibe and unbelievably affordable rent prices.