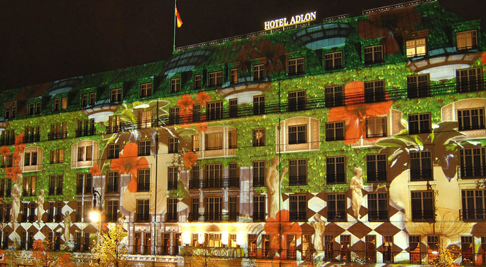 Long the grand dame of German hospitality dating back to 1907 when it was built by local restaurateur Lorenz Adlon, the property hosted luminaries of the day including Charlie Chaplin, Josephine Baker and Marlene Dietrich before being mostly destroyed in 1945. Following reunification the hotel as well as much of Pariser Platz surrounding the eastern perimeter of the Brandenburg Gate returned to its urban glory and with it's a replica of the Hotel Adlon now operated by Kempinski Hotels. An imperial façade along tree-lined Unter den Linden leads to a two-story lobby with first floor lounge intersected by a sweeping staircase of white marble balusters. Five in-house ateries include 2-star Michelin Lorenz Adlon Esszimmer with its European-inspired menu by Hendrik Otto as well as Asian-theme Uma Restaurant. Further perks include summertime champagne lounge along Pariser Platz and weekend nightclub known as Felix that's a top draw for international visitors. Additional amenities include the best hotel spa in Berlin with its own indoor pool, sauna circuit and fitness center in addition to a hair and beauty salon.

Having complete two expansions since its 197 reopening, Hotel Adlon is now home to almost 400 rooms and suites with a modern luxury design of dark wood furnishings, regally upholstered seating arrangements and marble bathrooms. A hotel that will always be famous for its Michael Jackson baby-dangling incident that happened from a hotel window, today a white-glove service aesthetic thrives in a series of designer suites that overlook Brandenburg Gate offering residence-style amenities like full kitchen, dining room and dedicated security detail with 24-hour limousine.