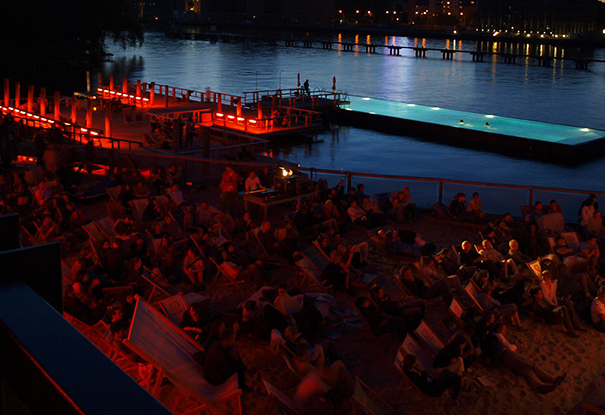 While all our focus will be on glamorous getaways and far-off vacations until September, most of us will actually spend the majority of summer in the city. Whether you're in Paris or Tokyo, London or LA, sometimes the most fun you'll have under the sun is right in your own backyard.

While the exodus to the seaside has already begun in Paris, those left behind get to indulge in this year's Bagatelle Mansion that's a hedonist Marie Antoinette-worthy party in the countryside 20-minutes outside of the city. For those that can't bare the lengthy UBER ride, hit Petit Bain with its floating dance floor and Seine-front barge location or Bar le Perchoir with its stylish rooftop that heaves with hip sound from 2pm on weekends. In Berlin there's a similar riverfront club, namely Arena located next to Badeschiff offering summer DJ sets in the sun that's a welcome alternative to open-air bars like Sisyphos and Kosmonaut. Shoreditch House or more bohemian Netil360 with its gypsy hippie crowd define summer weekends in London as well as Kensington's The Roof Gardens that lure socialite vixens and titled 20-somthings.

Le Bain in New York still makes us think of summer nights even after all these years as well as Refinery Rooftop set under the Empire State Building. In LA, Petit Ermitage in West Hollywood beckons flower crowns and summer ponchos to its poolside lounge while Nobu Malibu prepares to compete with forthcoming Cecconis Malibu. San Francisco's Biergarten is almost worth its long line for hipster beer in Hayes Valley while The Tipsy Pig does a mean mimosa from its rear garden in the Marina. Summer means humidity in Hong Kong, but luckily at Sugar inside Swire's EAST does one of the city's best terraces aside from Sevva that requires a lot more wardrobe planning. And showing-off your look is what makes Tokyo so fun come June with Xex Daikanyama with its sexy terrace pool and even house sounds while Hacienda Del Cielo in Shibuya is a refreshing Latin-distraction with epic rooftop terrace that's better than the Japanese nachos.