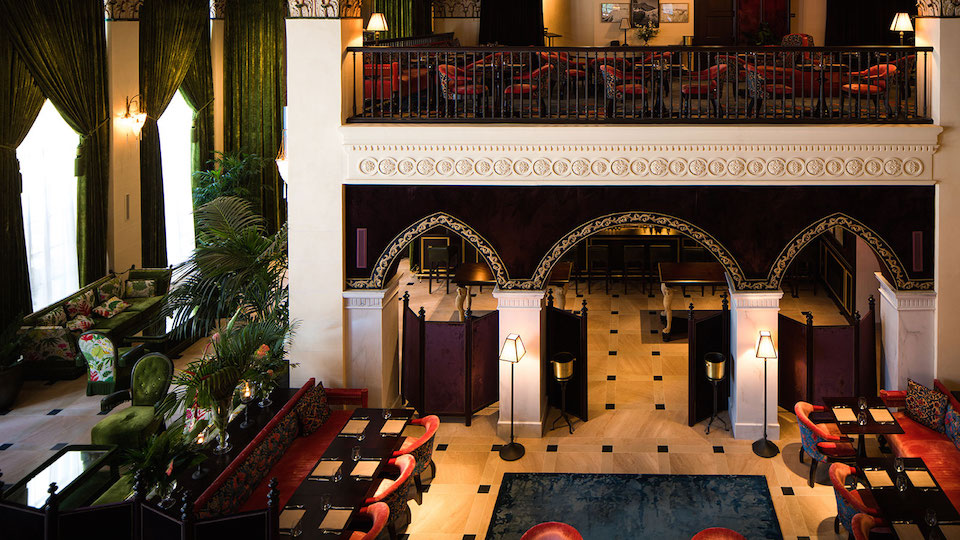 Based in Los Angeles, we've been watching and rooting for the revival of DTLA (Downtown LA) since developers like Tom Gilmore began to create residential lofts from historic bank and office buildings in the late 90s. Since that time, rumors of Gansevoort's and Mandarin Oriental's came and went as well as Kelly Wearstler-designed lofts and boho whisky bars that boomed then fizzled flat. But alas, DTLA is finally coming to fruition after 20-years of trial and error and nowhere is that better realized than at the second installment of Sydell Group's The NoMad Hotel.

On a balmy January day we explored the new NoMad, which from its 6th and Olive location boasts an urban, edgy vibe by day enhanced by the building’s 1920s pedigree that was once the headquarters of The Bank of Italy - that later went onto become Bank of America. A towering, original masonry structure is updated with tinted environmental windows and double doors that lead to a gold and blue Italianate lobby with double height ceiling and moody décor reminiscent of French architect Jacques Garcia's other works at Hotel Costes, La Mamounia and The Nomad NY. Gold-trimmed coffered ceilings hover over velvet settees and chairs with silk-tasseled embroidery and giant birds of paradise that are reminiscent of the Ambassador’s Coconut Grove. A chic coffee bar brings a glam, rococo café scene to the lobby near The Library lounge with its boho taxidermy vibe and The Lobby restaurant with its all-day dining that’s the most LA of the hotel’s culinary offerings.

The 241-room property is far more of a full-service hotel than the NYC original with rooftop pool that promises to be ready by summer and hopefully will be a bit more refined than LA's other rooftop pool scenes. Rooms feature custom Garcia-designed furnishings accented with bespoke fixtures, original art, and freestanding bathtubs in select upgraded rooms. But the true soul of The Nomad remains in its restaurant offering, the 110-seat dinner-only restaurant, Mezzanine helmed by Daniel Humm of Eleven Madison Park and NoMad NY. A formal, romantic culinary experience recreates the original NoMad NYC eatery with its revered roast chicken for two tamed with a mere black truffle and brioche along with a more LA-minded selection of hummus with lavash, Santa Barbara crab salad and slow-cooked carrots with dates and wheatberries. By far the most respectable restaurant to debut downtown since Patina at Disney Hall, the question is whether the area is ready for such a refined culinary offering in lieu of DTLA hits like Bestia, Bottega Louie and Otium with a far more approachable style and price point. But then again, that was DTLA before The NoMad arrived.