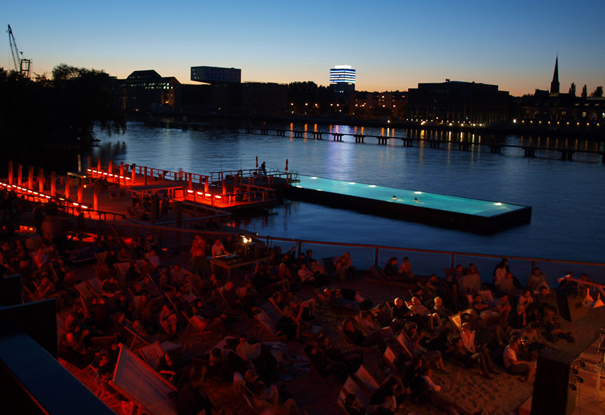 While other parts of Germany are far more famous for October travel, it's Berlin that beckons our imagination in late summer as street cafes sit under blue skies and locals make their final journeys to Badeschiff and Wannsee. While we're usually seduced by the rooftop pool of Soho House and grandiosity of Hotel de Rome, real Berlin is best found with a room at smaller, residential hotels like Hotel Amano, Michelberger or Sankt Oberholtz with their commune-like lobbies and plaid-clad locals hidden behind scarves and scruff as they contemplate Brecht, Richter and Wetten Dass.

Unless you're a Berlin local or visit multiple times a year, it's incredibly difficult to keep up with this city that seems to shift it-neighborhood and art scene on a seasonal basis. For shopping we like to stay close to the Mitte and Friedrichstraße, preferably starting the day with a cup of coffee at The Barn that roasts its own beans every week. Afterwards a stop in Departmentstore Quartier 206 is followed-up by a walk to Apartment and The Corner Shop along Gendarmenmarkt with its mix of Balmain and Rick Owens couture and bespoke, curated objects. Lunch should be kept quick and light ideally at Vegetarian new edge Chips or perhaps happy hour at the weinbar of Rutz with its 4-course tasting menus and dishes like roasted flank steak and beef tartar. And since the sun still doesn't set til after 7pm, there's still light to take in Kunst-Werke - Institut for Contemporary Art with its Kate Cooper exhibition through early 2015.

Over the next week you'll find the final performances of the Deutsche Oper Berlin's Open-Air im Parkhaus, otherwise opt for the Berliner Philharmoniker as conductor Simon Rattle conducts an entire cycle of Brahms and Schumann symphonies. For dinner we suggest obsessing over a reservation at hotspot Horvrath that's a stylish, casual take on daring epicurean or slightly more trodden Katz Orange. Those in search of locals are best to flock to Friedrichshain with its Michelberger Hotel that's now serving daily supper that's one of the hippest hotel scenes in Europe or perhaps Schneeweiss with its all-white Alpine glamour followed by a stop at CSA that's equally architectural with a lounge that perks through 2am.