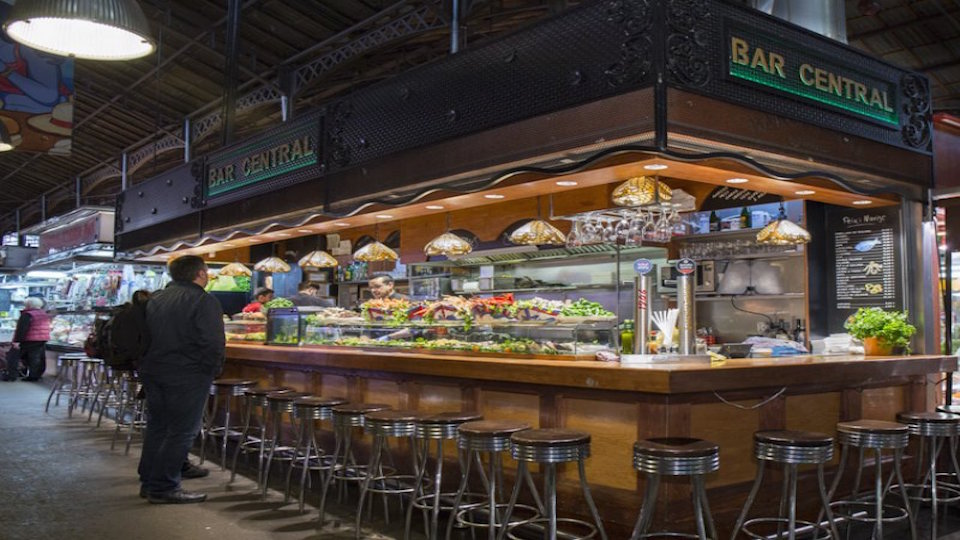 There's little disputing La Boqueria, off Barcelona's La Rambla, ranks up there with Leicester Square and Hollywood Boulevard in touristyness. But beyond the perimeter of pushy veggie vendors and kitschy cafes, the interior of the market remains a culinary treasure worthy of an close-up encounter. Bar Central is located towards the western-edge of the market, across from a butcher selling pig heads and fruit stand selling juicy purees. The counter-style restaurant offers no more than 25-chairs, which around 1pm become a coveted commodity for the influx of well-read readers that regard the family-operated restaurant a foodie-must.

A daily menu is scribbled on a whiteboard above a sizzling hot grill attended by grandfatherly chefs and staff that communicate in points, grunts and occasionally yells. Meals begin with a paper placemat that slowly gets shoved under limitless glasses of wine followed by regional specialties like an avocado and whitefish salad with dill and capers. Main course is a mishmash of everything seafood with mixed grill plates of shrimp and halibut, heaping of grilled octopus and platters of shellfish slathered in Spanish olive oil and freshly squeezed lemon juice. Desert is available but should only be ordered if no one is waiting, otherwise expect the row of standing patrons waiting behind you to start to hiss and moan.

One of Barcelona's top eateries is no more than a counter-style restaurant at the center of the city's La Boqueria offering endless seafood for customers that wait upwards of 1-hour for a seat.

Stylish beach club makes the most of its W Barcelona location