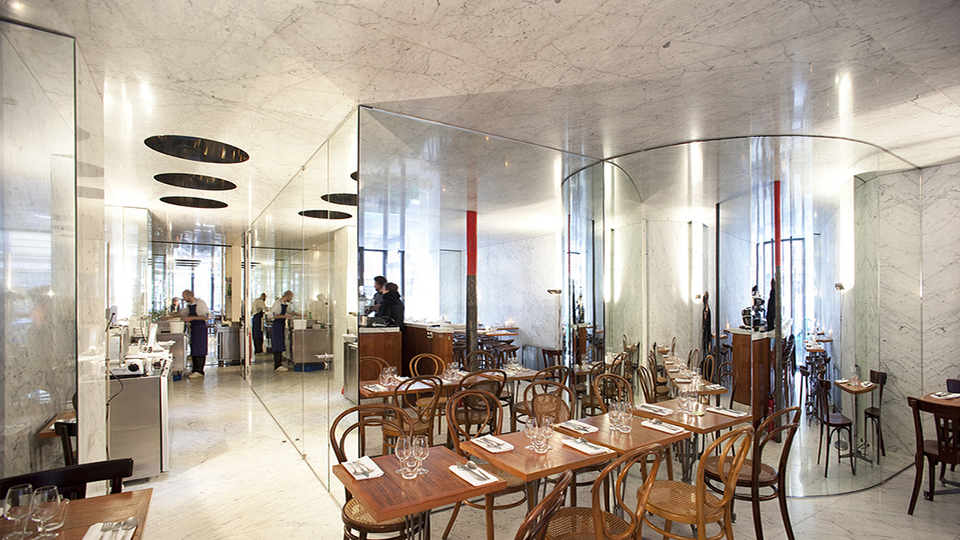 His name is Inaki Aizpitarte, the Basque-born chef behind acclaimed eatery Le Chateaubriand, and he's set-up a second tapas-theme eatery in the same neighborhood aptly named Dauphin (or heir apparent). The name actually hasn't changed since the restaurant's previous owner, but the look the look and appeal most definitely has with signature of retractable glass edifice, slabs of white marble on walls and ceiling with reflective room dividers all penned by the Dutch architectural firm of Rem Koolhas with Clément Blanchet. Inside, a collection of simple wood tables with bistro chairs and backless stools surrounds a boisterous bar, also marble, that's mostly for dining as locals snap-up any spot they can for the nightly dinner service.

Tapas in the middle of Paris’s 11th, meals begin with a lengthy wine list of mostly French wines with standout bottles like a 2008 Beaujolais Cote du Py. Smaller small-plates include a homemade smoked mozzarella, terrine of foie gras and calamari tempura followed by heartier portions of slow-cooked oxtail, beef bourguignon and cod-liver macaroon. For dessert, the chef does his own interpretation of classic dishes like apple tartin and creamy chocolate mousse derived from extensive travels through Israel and the Middle East.

Recently featured by The Selby and NY Times, expect a few more tourists post international buzz. But to date, the crowd has been impeccable with a collection of Paris’s most fashionable foodies that follow Aizpitarte with almost religious fervor. Photos: Courtesy of Clement Guillaume.