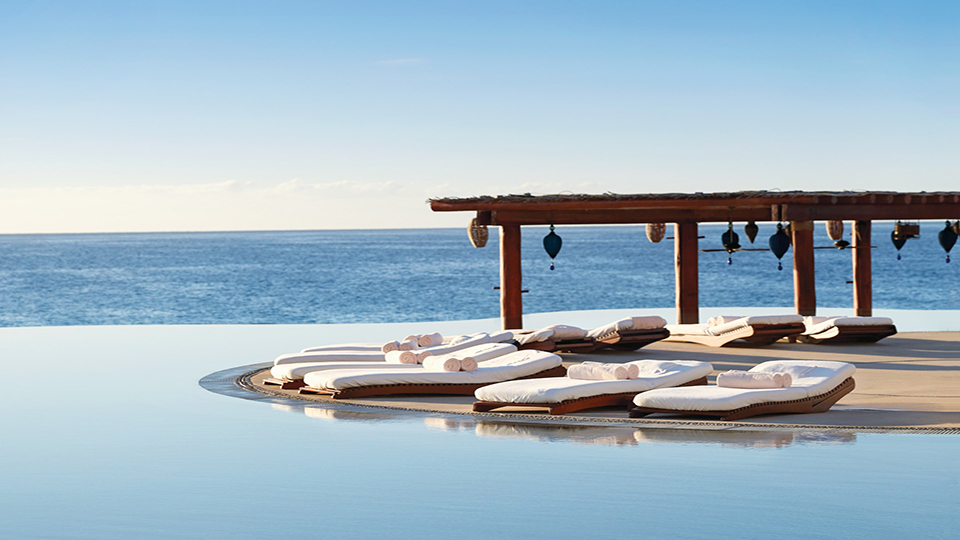 We've never taken the southern tip of our native California very seriously. We dismissed its rambling chain hotels and places called Squid Row or Cabo Wabo as the Pacific's version of Cancun. But in years recent, Los Cabos has enjoyed a reinvention with six-star resorts, destination eateries and ambitious real estate developments that are luring California's coolest visitors down for weekends and even second homes. But in the hotel sphere, just three names should frequent the lips of well-heeled travelers, namely One&Only Pamilla that we tend to associate with well-to-do families traveling with children, Auberge's Esperanza, geared more towards mature travelers and Las Ventanas, for people with a discerning design eye.

Upon arrival in Los Cabos, a gleaming new airport is one of the best in Mexico, but beware the afternoon customs line. Once you've cleared customs, Las Ventanas (pictured) greets you with a private driver - G-550 or Escalade - that wizzes you to their resort property in a cocoon of chilled water, hygienic wipes and personal wifi. Although you'll likely only see the lobby upon arrival and departure, at Las Ventanas it's a showstopper. With its open-air architecture, native palapa roof and brass telescope for watching the coastal parade of migrating blue and humpback whales, take an extra minute coming in to enjoy the view. Rooms here exude a tropical elegance, ala Cuixmala, that we heard was the overall inspiration for the property, including its top-of-the-line villa that's still under overhaul. Las Ventanas is also adding a series of private residences, likely to fend off the stiff competition as Aman Hotels, Four Seasons, Montage Hotels and Six Senses are all in various stages of development.

Back at Las Ventanas, special add-ons like movie nights on the beach and bespoke whale safaris prove as memorable as a day baking poolside or dining on fresh jicama and guacamole inside the actual pool. Service is spotty, however, varying between staff that seemed over demanding Americans and those that upsell you on everything from tedious spa treatments to double shots at the bar. But it's the amazing cleaning staff and the hotel drivers that still exude a sense of pride for working at the area's top hotel. When day turns to night, dinner in the hotel is best mixed with a night at Flora Farm or perhaps new Acre where you might see Cindy Crawford and her Casamigos gang. Or, simply opt for a night in to lounge on your terrace and watch the star-filled sky in a casual paradise not so far from home.