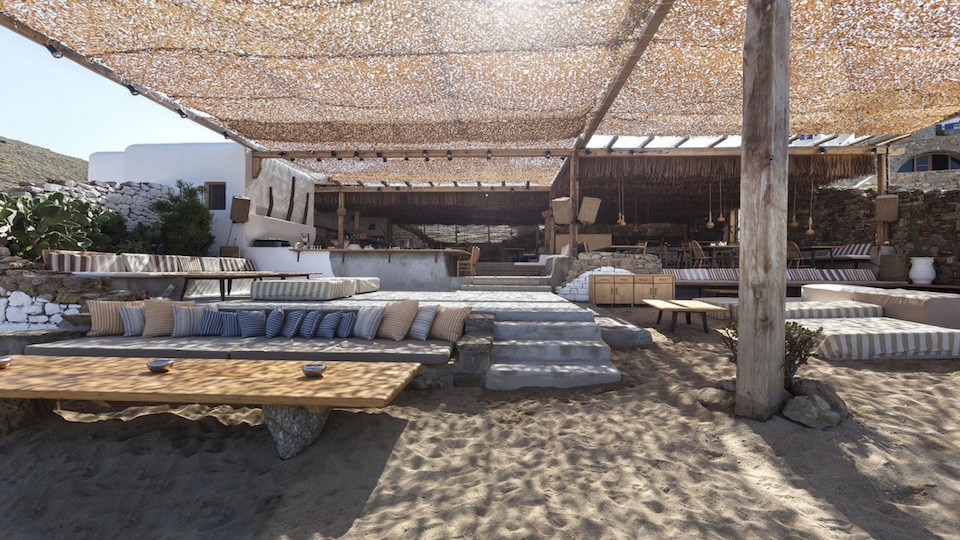 Of all the newsletters we have written over the years, our annual Mykonos wrap-up generates the most feedback from our readers - and not the positive kind. It seems everyone has their own personal version of what's best in Mykonos, whether it be a beloved beach like Lia or Jackie O' that we always find too dirty and weathered to frequent - much less actually recommend. But come June, the summer season begins in Mykonos with restaurant buzz and new hotels that hope to make a mark for more than just a season. This year, the iconic Santorini resort Katikies arrives to the island right on Agios Ioannis beach offering 35 private villas with three alfresco restaurants, two infinity swimming pools, sunbathing decks, a state-of-the-art gym and the first hotel on the island to offer a 24-hour concierge service. While diehards of Bill&Coo and the Belvedere will ultimately hiss at the announcement, a proper luxury hotel is long overdue in Mykonos.

The season's first Sunset Ritual at Scorpios is behind us, as well as their new daytime Inner Gardens program thats a series of workshops, talks, and classes exploring mind-body wisdom, creative expression and transformation at the San Giorgio Mykonos. We prefer it for its late lunches and sunset parties that are a welcomed contrast to Nammos - that attracts the most unbearable crowd come July and August. Buddha Beach, Alegamou (pictured) and Sol YMar are also on our hit list, each with its own quirky appeal and location - just be willing to give up a day going to Spilia that's increasingly become the uber-cool kids haunt. Last visit we had it out with the owners of Kikis, a large group trying to cut the line and beg our way into a last seating after three days of beach starvation. Sadly it failed and I'm sure we will be begging again this season - but even a three-hour wait is worth it.

Look for pop-ups abound this year, the best of which will include a Dior Resort Flagship with Mykonos-branded bags by Dior Artitistic Director Maria Grazia Chiuri. In terms of non-beach or daytime dining, some big names make an entrance to the island this year that already includes Hakkasan's Ling Ling, Bonbonniere and Toy Room. Monaco's Beefbar joins the pack, setting up shop at Bill&Coo with a posh, seafood-inspired carnivore experience contained within a thoroughly Aegean space. Restaurant Katrin, the best French eatery in town, gets a slight nip and tuck for its elegant evening dining while Nice n' Easy expands its empire near the port and Interni proves the top dinner booking of the 2018 season - yet again. In terms of nightlife, look for Void to continue to fill the late night dance space with guest DJs that rival even Cavo Paradiso - but with far less riffraff, especially once high-season kicks-in.

Our Favorite Moments of Summer in Mykonos

Our Favorite Moments of Summer in Mykonos

On the Ground in Summer Mykonos

On the Ground in Summer Mykonos

Summer Begins in the Eastern Mediterranean

Summer Begins in the Eastern Mediterranean