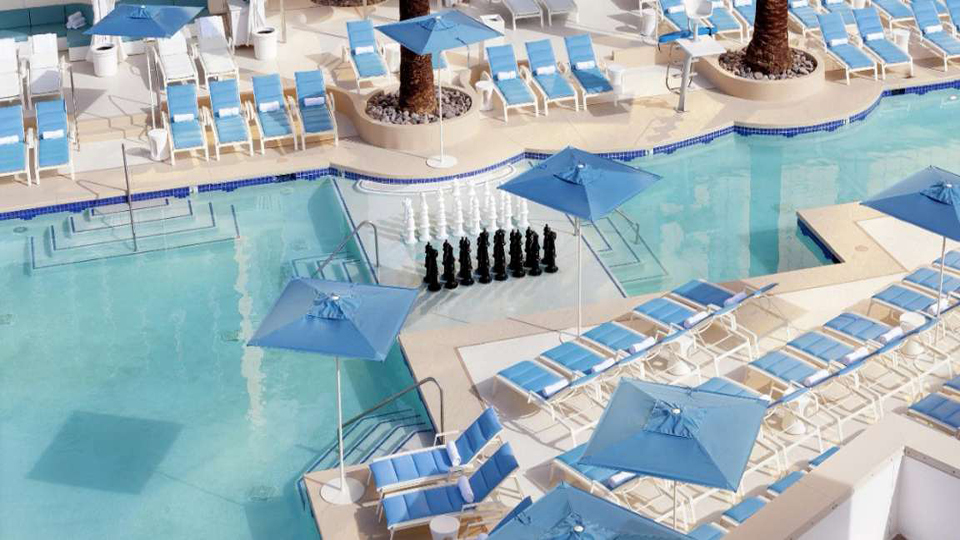 Summer is our favorite time to visit Las Vegas. Unbearably hot days are justifiably spent in an air-conditioned maze of shops and casinos interrupted by meals by the likes of Ducasse, Savoy and Robuchon with nightlife curated by the worlds best DJs. For those arriving in town for the first time in a few years, favored properties like the new Delano and Nobu Hotel add to the landscape of our preferred hotels like Cosmopolitan and Wynn. The latter, Wynn Resorts, recently announced it would be replacing its Tom Fazio-designed Wynn Golf Club into a lake and a mile-long boardwalk called Paradise Park that will offer waterskiing, paddle boarding and fireworks show every night that signifies a new real estate boom along the strip.

By May, pool scene has already kicked off with familiar names headlining equally familiar venues up and down the strip. Encore Beach Club continues its unbeatable DJ lineup with David Guetta, Diplo and Avicii before their moves to Ibiza in July when Zedd, Kaskade and Skrillex take over for the rest of summer. SLS Las Vegas attempts to up its pool power this year with two new clubs including the more upscale Foxtail Pool Club with cabana service and food by Top Chef alum, and Beach LiFE at SLS where a wilder scene prevails at its rooftop pool. Tropicana also arrives with its Sky Beach Club in the former Nikki Beach space while a slightly more civilized pool scenes debuts along Mandalay Bay's Lazy River at Delano Beach Club (pictured).

With some of the best chefs in the world operating outposts in Las Vegas, our favorite meals this season continue to include Mario Batali's Carnevino, DB Brasserie by Daniel Boulud and Jaleo by José Andrés with heftier faire from L'Atelier de Joël Robuchon or Le Cirque sidelined during bathing suit months. That means you'll also have to skip Guy Fieri's El Burro Borracho with its mac n'cheese bacon burgers in lieu of new Mr. Chow inside Caesar's, upcoming Momofuku at The Cosmopolitan later this year or Carbone Italian at Aria. After a shaky start, Aria is upping its cache with new Jewel Nightclub that opens later this month with headliners like The Chainsmokers, Steve Aoki and Steve Angello. Jewel hopes to compete with the Wynn’s Surrender and Hakkasan - both long-time strip staples.