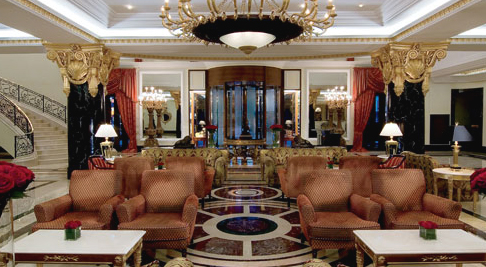 There is one address that dominates all other hotels in the Russian capital and that’s the Ritz Carlton Moscow. A dazzling 11-story uber-luxury hotel at the edge of Red Square is arguably one of the best in the Ritz Carlton portfolio.&nbsp; Its entrance on Tverskaya Street leads inside a 2-story lobby with marble floors and columns etched in over 30-kg of real gold detailing. The ornate foyer misses the mark in décor, oversize sofa and club chairs in too-regal emblematic patterns, but makes up for it in the lobby bar with burl paneling and mix of tea and whiskey culture.<br />&nbsp;<br />Two restaurants include Russian-minded Caviarterra offering local and Georgian cuisine as well as a Ginkgo-inspired eastern eatery by Japanese chef Seiji Kusano. Summertime offers the O2 Lounge that’s a rooftop lounge with evening nightclub that’s one of the toughest doors in Moscow. O2 features an outdoor sushi restaurant and weekend DJs in a rooftop beach club setting of white banquettes and Faberge-painted orb chairs. Morning rejuvenation comes via the ESPA, one of the best best designed spas in this part of Europe in a marriage of gold foil walls erupting in architectural fireplaces and reflection pools where nudity is a prerequisite even for billionaires.&nbsp; <br />

In Russia, even new money loves the old money look. Guest spaces are generous in their dimensions ranging from 600-sqaure feet to over 1,000-sqaure feet in larger suites. Rooms are old school Europe with flora-print upholstery and heavy drapery framing views of Seven Sisters and Red Square. Top-level rooms are often booked by oligarchs remodeling their local residences with super-model in tow best of which is the Ritz-Carlton Suite with living room with grand piano for private performances hired-out from the Moscow Symphony that’s even hosted the Obama’s. An upper-level Club Room offers guests of a certain room category privileges into the all-day lounge with rotating appetizers and complimentary wine that could save a bundle given the restaurant prices in Moscow.